Oh I am excited to share with you how to make your own Homemade Frozen Pizzas. It may sound a little mad, but stay with me – there’s a method to my madness.  You see, Hungry Hubby and I just love pizza, which you will surely have noticed if you follow me on Facebook and I already have plenty of ideas  of recipes for you to try on the blog.

However, despite a rapid cooking time, pizza isn’t truly fast food when made from scratch because of needing to let the dough prove slowly to maximise flavour and texture.

When I went on my Sourdough Masterclass with Dan Lepard, the topic of conversation drifted onto pizza and he shared some of the best advice about making your own I’ve ever heard and I’ve been putting it into practice ever since. It’s finally time to share the method with you!

When making pizza from scratch, the one thing I’ve come to learn myself is how much better they taste for allowing the dough to prove very slowly. I typically make mine in the morning before work and as long as it’s not a hot day, leave covered on the worktop all day to prove. It’s a soft, almost batter-like dough and 12 hours of rising gives a hint of tang reminiscent of sourdough. Leaving it 24 hours is just dandy if your plans change and the flavour will only benefit from it.

Thing is, the time when you want a freshly cooked pizza is all too often when you don’t have the time to make one. Enter Dan and his sage advice. In a nutshell, he shapes the base and coats with only the layer of tomato sauce before cooking for 8-10 minutes.

The base will be risen and set but will have little colour on it, once cold, it can be frozen for another day. When you are ready for it, sprinkle on your toppings and cheese and cook in a hellish hot oven for a mere 10-15 minutes and bam, dinner is served! 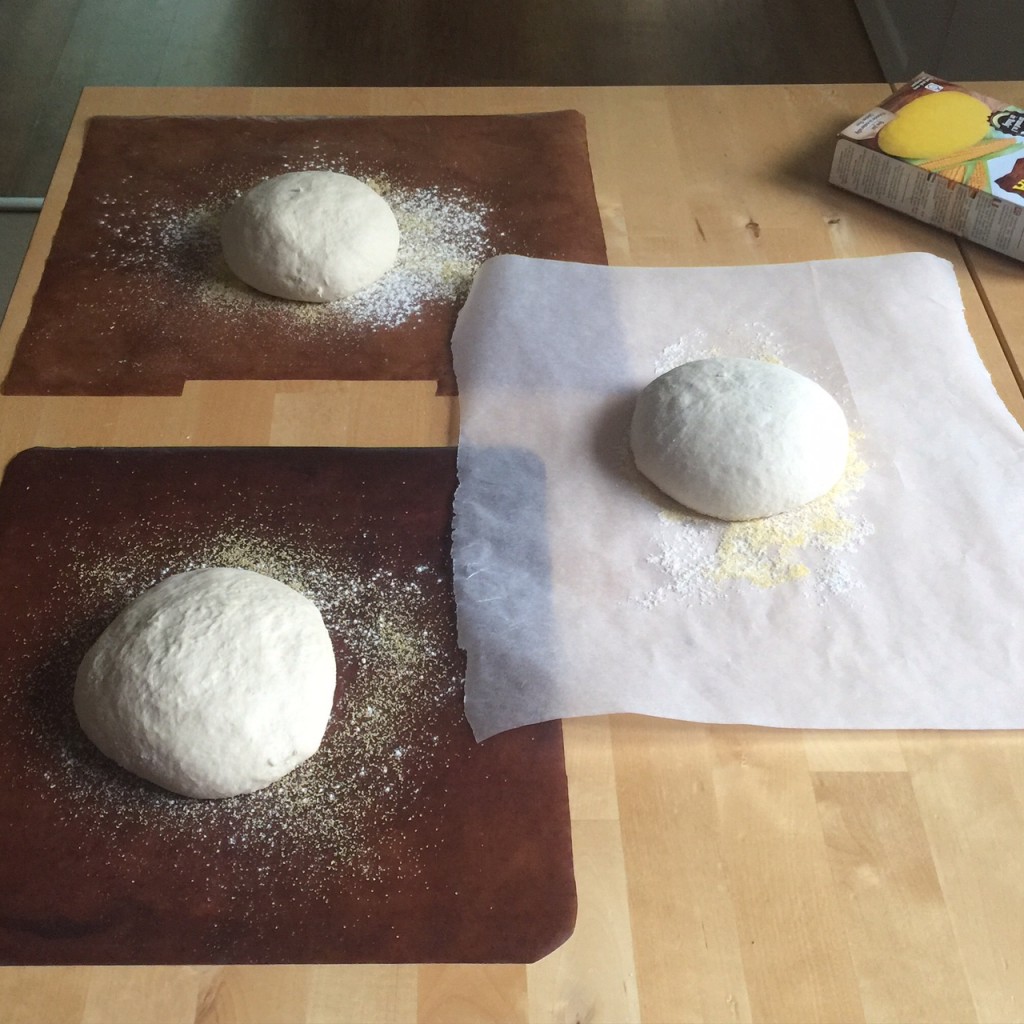 Other wisdom from Dan included the importance of pre-shaping the dough as you can see here – once proved, divide the dough into portions and shape into balls. Allow to rest for an hour and then pat and push it out to a round. You could pick it up and spin it in your hands if you are more deft than I! This helps give strength and structure to the dough so it doesn’t snap and tear as you shape it.

Next up was making sure your tomato sauce (by this I mean a passata base – i.e. whizzed up canned tomatoes – with a few select seasonings, not ketchup!) was liquid enough for you to quickly spread on the pizza base without dragging and get it in the oven pronto so it doesn’t go soggy. Be generous though as it is getting baked twice so you want plenty on there.

To bake it in the absence of a pizza oven, a Welsh bakestone

is something Dan advocated and I bought one as soon as I got home from the class and I haven’t looked back – it is a thick steel plate you put in the oven to preheat and it gives a beautifully crisp base and also the heat from underneath really helps with getting the pizza cooking and puffing up immediately to give a well aerated base.

Of course, you can later use it on the stove top to make actual Welshcakes with, for a more traditional use out of this handy-dandy piece of kitchen kit. One thing though – you only need this to cook the raw dough pizza on. When you reheat it with the toppings from frozen, place it directly on the oven shelf, like the ones from the supermarket tell you to do. As the base is already crisp enough, it will go too hard if you use the bakestone the second time too. 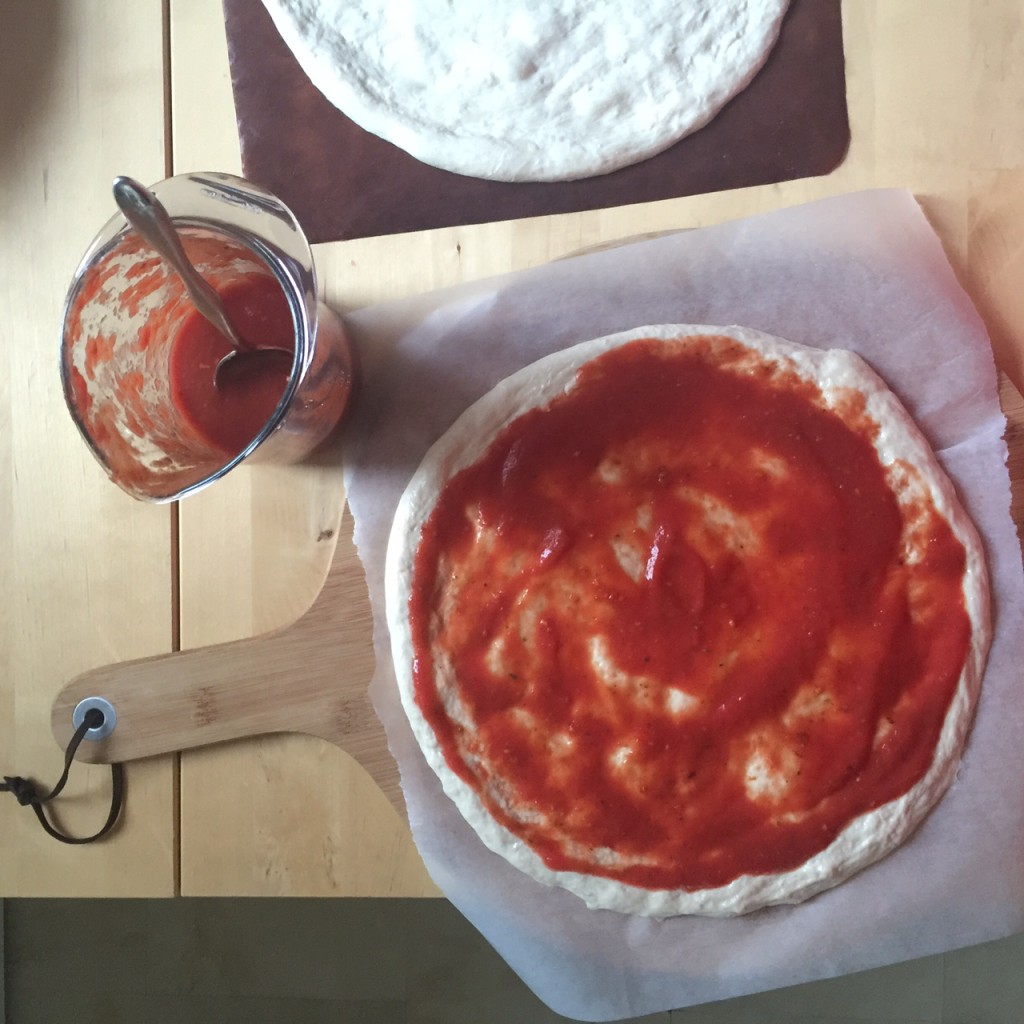 Using Dan’s nuggets of wisdom I have developed my own recipes for the base and tomato sauce for you to try. In truth, every pizza I make has taught me something. I make enough dough for 3-4 large pizzas and conveniently, that uses up one large (approx 400g) can of plum tomatoes to make the sauce.

I must have closure issues as I find it very hard to leave half open ingredients of any sort in the fridge for long without finding a use for them, so if you’re like me, I’m sure you will find this recipe very satisfying too! You can vary the seasonings to suit your mood or the toppings you have planned on using for the pizza. This is a basic starting point for you to tweak to your own preferences. Adding a teaspoon of my Italian Seasoning is delicious, especially with a nice fennel and black pepper studded salami.

The point to making pizza bases specifically to freeze for later is to make getting a real meal on the table fast one days when you may have otherwise bought one part-baked from the supermarket on the way home or worse, ordered from your local pizza delivery place. Don’t get me wrong, I’ve had some tasty takeaway pizzas but the portions tend to be huge and I can’t imagine any of them use higher welfare meat or quality ingredients in general.

Waking up the nice morning bone dry and needing a gallon of water to drink leaves me a touch concerned about the amount of salt they use too. Make your own life easier (and your family healthier) by whipping up a large batch of dough on a weekend when you have time to enjoy the process. Be mindful that if using a stand mixer, they can’t always accommodate large volumes of a heavy, yeasted dough so you may have to do this by hand. Which brings it’s own therapeutic benefits too. There’s nothing quite like the feeling of cool, soft, smooth dough in your hands.

When we get to a weary Wednesday when all I want to do is eat and collapse onto the couch with a whole season of Lucifer or Sherlock (my current Netflix obsessions) then I simply bang the oven on as hot as it will go, text Hungry Hubby and get him to bring home a bag of salad and get chopping a few toppings to strew across my frozen, sauced up pizza base and once the oven is about 240˚C, in it goes and out comes the glass (bottle) of wine to serve with it. No stress. No mess. No worrying where on earth the pepperoni came from or how much salt the takeaway has laced your pizza with.

It would have had to be one pretty horrendous day for me not to mind 10 minutes of prep in order to get real, home cooked food on the table. It would also make entertaining midweek a breeze. Your guests will be amazed at your domestic god or goddess powers when you ask them to select their favourite toppings and a mere quarter of an hour later, you shimmy forth with a steaming hot, home-cooked pizza! Just make sure you put plenty of beers in the fridge the night before and they will never eat another Dominoes again 😉 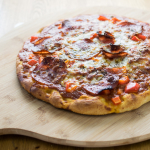 Print
Homemade Frozen Pizza
How to make pizza crazy fast midweek! We're talking 10 minutes of prep and 15 minutes of cooking time, during which you have your feet up and a glass of vino or a bottle of beer in your hand... 😉
Servings: 4
: 962 kcal
Author: Just Jo
Ingredients
For the pizza bases
To shape
For the tomato sauce
Essential kit
Instructions

This post contains affiliate links, meaning I will earn a little commission if you chose to buy items I’ve advertised, helping me to bring you all these recipes for free

Like this? Then why not try these related recipes: 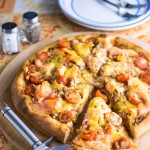 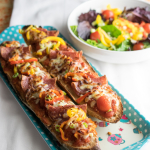